The Ancient World, as Illustrated by Rome

Water management and water treatment are as old as civilization itself. In fact, civilization is impossible without a proper water supply. We know much about ancient aqueduct and irrigation engineering through archeological digs. From Mesopotamia and Ancient Egypt to the Indian subcontinent, from the Chinese and Khmer Empires to those of the Mayas, Aztecs, and Incas in the Americas have come evidence of spectacular waterworks. On a smaller, domestic scale, the Greeks and Egyptians knew how to purify water by boiling or filtering it through porous clay jars, but this was not a general practice. The Egyptians also knew how to use alum (potassium aluminum sulfate) to coagulate material out of cloudy water to speed its settlement and facilitate its filtration. It is the first chemical water treatment known.

But the master engineers of the ancient world were the Romans, and it is their water systems that we understand best. Our knowledge comes not only from many well-preserved systems that can be found throughout what was their vast empire, but also from written works that have survived. Among these are books by the architect Vitruvius; by the naturalist Pliny the Elder; and, especially, by the general, governor, and consul Frontinus. He had been Commissioner of the aqueducts (curator aquarum) and wrote a famous report for the Emperor Trajan on Rome’s water supply, De Aqueductibus Urbis Romae. These descriptions of their complex water systems inform us not only about the methods and materials they developed and used so spectacularly (especially hydraulic concrete), but also reflect the challenges that the Romans faced (as other civilizations did) because of their limited means of water treatment.

The Romans certainly knew about various qualities of water. Some of the rivers, streams, and springs that they tapped and diverted to their cities were excellent sources, others not so much. A few of their aqueducts brought in water that they would not even drink, but which they used for other purposes — cleaning, bathing, and even filling up pools in the arenas to hold mock naval battles! They had a practical understanding of the problems deriving from water cloudiness (or turbidity) and water hardness, both of which can lead to blockages of aqueducts. Suspended particles, which cause turbidity, can settle and silt up the system, whereas dissolved calcium and magnesium, which cause water hardness, can lead to incrustations and narrowing of the channels. To solve the first problem, the Romans built huge settling pools at the head of the aqueducts. These had sloped floors to facilitate the removal of the sludge that accumulated.

The problem of water hardness could not be solved as easily and no doubt led to a design that allowed for the cleaning of the scale off the walls of the conduits by hand, surely an arduous task devolved to slaves. This meant that aqueducts had to have channels or ducts that were large enough to be accessed by line-inspectors (in Latin, called circuitores) and workers. They also needed periodic vertical access shafts (lumina, columnaria) as, contrary to the popular notion of Roman aqueducts as spectacular arched structures spanning valleys, they, in fact, consisted for the most part of tunnels. The access shafts also served as air vents, as the Romans believed, quite rightly, that exposure to air improved water quality. Throughout most of these systems, water flowed by gravity and it is a wonder that they achieved regular slopes with their basic measuring tools, the chorobates, for leveling gradients, and the groma, for alignment. 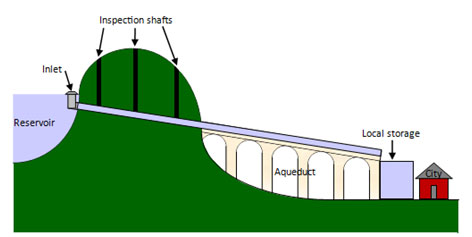 The Romans were aware of the principles of siphons, and a few such systems have been found. A siphon is a much cheaper alternative than an arched structure for crossing a valley, but, as it cannot have open vents, it cannot be easily accessed for cleaning scale. It may well be the reason for their rarity.

Although the Romans were familiar with the concept and attributes of siphons, these structures were rarely found implemented, possibly because they do not allow for open air venting or easy access for scale removal.

All in all, the administration and maintenance of the Roman water supply needed to be highly organized, with specialized officials, engineers/architects, laborers, and slaves assigned to each important task.

Scaling must also have been a serious problem in the many luxurious public baths of Rome, as large amounts of water were heated. This would have caused calcium carbonate to precipitate out of solution. Less is known about how this problem was addressed, but we can imagine that the heating vessels and conduits required routine descaling.

Finally, and surprisingly, there was one very positive effect of hard water in Roman cities. Once water reached the water-castles (castellae) of the city, the distribution occurred through clay and then lead pipes. This once led to a generalized belief among historians that lead poisoning of the elite caused the fall of Rome. However, there is now scientific evidence that scaling inside of the lead pipes would have prevented leaching of the toxic metal into the water.

European Stagnation and Rapid Advance After the Industrial Revolution

Not much progress occurred in Europe for a thousand years after the fall of Rome. Most cities had poor waterworks, both regarding the water supply and the disposal of sewage. This led to frequent epidemics of waterborne diseases such as typhoid and cholera, but because the "miasma" or foul air theory of disease propagation held sway, no measures were taken to improve the water quality. Even the invention of the microscope and the observations by Leuwenhoek of teeming microorganism life in water did not goad authorities to act.

The little progress that occurred was often driven by such industries as textile manufacturing and, later, papermaking. Large amounts of clean water were needed for these and other processes. Alum, mentioned above, was very much in demand, not as a coagulant, but as a mordant, a substance that fixes dyes on fabrics and makes them brighter.

The industrial revolution accelerated the need for clean water. In 1804, large-scale filtration using sand was invented by a Scottish engineer, John Gibb, who needed clean water for his bleaching plant. He sold the surplus water to the public. Within a few decades, his filtration process had been improved and was being applied to London’s water supply. It is still widely used today. In parallel to the development of new technologies such as improved pumps and piping, large waterworks were built to bring fresh water into major cities and move sewage out — for example, the Ourcq canal in Paris, commissioned by Napoleon and built by the engineer Pierre-Simon Girard, and London’s great sewer system, commissioned by the Metropolitan Board of Works and built by the engineer Joseph William Bazalgette. 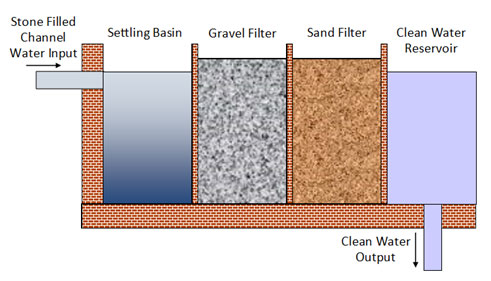 The first recognized large-scale water filtration system was invented in 1804 by John Gibb, a Scottish engineer. The system used a series of earth material filters to purify water supplying a bleaching plant in Paisley, Scotland. In this system, water passed from a stone-filled channel into a settling basin then moved successively through a gravel filter and a sand filter prior to entering a central water storage basin. Surplus water was sold to the public.

Find a Water Treater Near You: Connect with a company in your area.