One way to save on energy costs is to make sure boiler and cooling systems used in industrial applications are running efficiently. When hard water passes through pipes, the impurities in the water will precipitate out onto the inside, building up scale. When water boils, impurities are even more rapidly deposited on the inside of the pipes in a boiler. These deposited impurities build up over time. They are commonly known as scaling. Narrowing of the diameter of the pipes due to scaling increases the pumping power required for moving water through the pipes. Scaling also increases the thermal resistance of the pipe, causing it to take more heat to boil water or more cooling to reduce the temperature of water. The effect of scaling is to increase energy costs due to reduced efficiencies.

Removing scaling from the inside of pipes is a difficult, labor intensive, and expensive process. Treating water to prevent scale buildup is more cost effective than trying to remove scale after it has been deposited. Water treatment programs that remove water hardness are instrumental in preventing the buildup of scale that reduces heat transfer efficiency. The graph in Figure 20 shows the relationship between scale thickness and heat transfer efficiency. As scale builds up inside pipes, it takes more energy to heat or cool water. 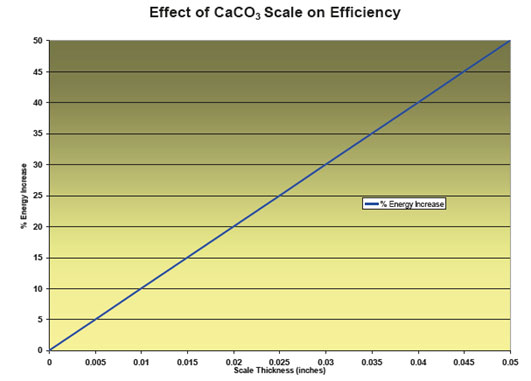 The effect of water hardness on heat transfer efficiency. As scale buildup increases inside pipes, the percentage of energy required to heat or cool water increases linearly.

When scale is allowed to build up inside pipes, the resistance to heat transfer increases cumulatively. This means that as the system becomes more inefficient, it takes increasing energy to heat or cool water in the fouled pipes. Figure 21. Cross sections of pipe demonstrating the buildup of scale due to hard water. Note that scale due to water hardness may be accompanied by corrosion. The mineral content of the scale may be reflected in the color of the deposits.

Cross sections of pipe demonstrating the buildup of scale due to hard water. Note that scale due to water hardness may be accompanied by corrosion. The mineral content of the scale may be reflected in the color of the deposits.

Scale continues to accumulate over time and is often accompanied by corrosion and further narrowing when water has not been treated to reduce hardness. When pipes are left untreated, water process temperatures can become increasingly difficult to control. Heat transfer processes that are less efficient waste energy and cost more. While a water treatment program costs money, the expense is generally offset by the savings realized in maintaining heat transfer efficiency.

Scaling reduces the cross-sectional area of the inside of pipes, increasing the pumping power required for moving water as well as reducing heat transfer efficiency.

Find a Water Treater Near You: Connect with a company in your area.